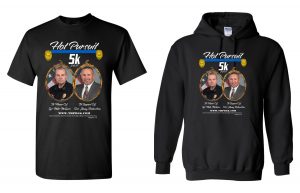 Sgt. Mike McGuire started this race because of his passion to help our local police officers and their families as they go through hard times. Even through his own battle with cancer Officer McGuire strived to help others in need. This year part of the proceeds will go to his family as Officer McGuire recently died. Detective Jimmy Richardson will receive money as well to help him in his fight against cancer.

We at Graphic FX want to salute Sgt. Mike McGuire for his selflessness and for being a hero that we can all look up to. Even at his end he only wanted to help others. Race manager, Chrissy John said, “He did not want it to be for him. He still wanted it to go to Jimmy. But I told him, you started this to help officers of law in the community, and now you’re one of those, and we want to help you.”

We would also like to thank all the sponsors involved in the Hot Pursuit 5K.